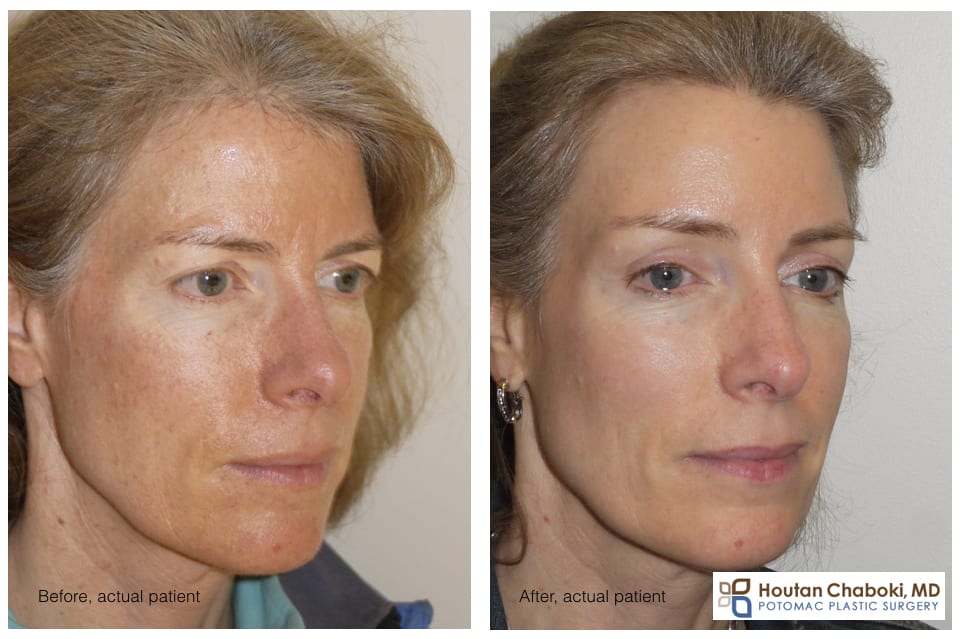 Before and after photographs of limited incision or endoscopic brow lift, with upper eyelid surgery. She appears more rested and rejuvenated with natural results.

Washington DC plastic surgery patients often want to improve their eyes, and discussion of the eyebrow is often included with the eyelid consultation. Some patients just need blepharoplasty, some a brow lift, and some would benefit from a combined procedure. We’ve reviewed brow lift vs. upper blepharoplasty in a previous post.

Brow lift surgery elevates the forehead and eyebrows to help create a more refreshed appearance. The two primary methods are the traditional brow lift and the limited incision brow lift. The term endobrow and limited incision are sometimes used interchangeably among plastic surgeons. Other brow lift techniques included the direct and mid-forehead lifts, but these are performed much less frequently. Unlike upper blepharoplasty which can be performed via local anesthesia, brow surgery requires either general anesthesia or IV sedation (twilight).

The main difference between a traditional forehead lift and other brow lift procedures is the approach to the brow area. Traditional forehead lifts make a long incision either right at the hairline, or just behind the hairline. Hair may be shaved during surgery. Forehead or scalp skin is removed with this type of brow lift. The advantages of this approach is the greater degree of control to brow position and the opportunity to create a more dramatic change. Disadvantages include a longer incision, longer operative time, itching, and higher risk of hair loss.

A limited incision brow lift is a relatively newer, less invasive approach for cosmetic brow and forehead enhancement. Endoscopic brow lift, or endobrow, are alternatives terms for this type of brow surgery. Smaller incisions are utilized and are hidden within the hair, which is often not shaved during surgery. A video camera or endoscope may be used to visualize the brow area through these smaller incisions. This technique for brow lifts requires more advanced training by facial plastic surgeons and plastic surgeons. Benefits of the limited incision brow lift include shorter operative time, smaller incisions, much less itching, lower risk of hair loss, and faster recovery.

Pink lines represent typical incisions for limited incision brow lifts, which are hidden within the hair.

Most plastic surgeons and patients generally prefer the limited incision method of cosmetic enhancement of the forehead and brow, which is applicable to most patients. However, each patient has specific cosmetic needs and particular facial anatomy, so endobrows may not be the ideal approach for everyone. Lastly, for those who don’t want any surgery, they can try a Botox® brow lift for a more subtle, temporary brow lift as compared to surgery.

Have you considered a forehead lift? Speak to your plastic surgeon to help decide which method is right for you.