Xeomin®, an alternative to Botox® in Plastic Surgery offices 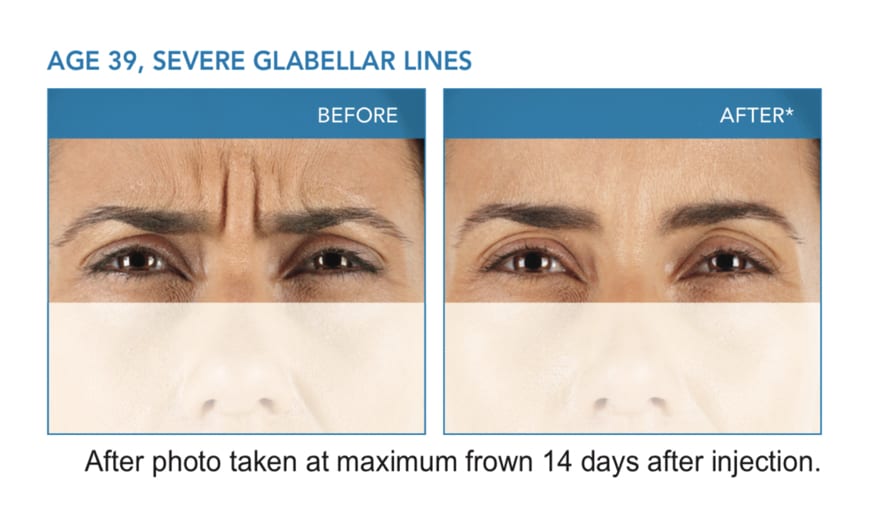 Before and after at maximum frown. Individual results may vary. Unretouched photos. Photos courtesy of Merz Aesthetics TM.

Botox is one of the first aesthetic treatments patients consider when visiting a plastic surgery or dermatology office. As part of a nonsurgical facelift, it’s used for a variety of enhancements such as smoothing forehead lines, raising eyebrows, softening lip lines, slimming a wide jaw, and lifting the neck. These aesthetic procedures have minimal downtime, and patients often choose to return to work the same day.

Botox is the older brand name drug of botulinum toxin type A that doctors use to relax wrinkles without surgery. It’s considered a safe method for temporary wrinkle reduction. Newer formulations of the drug are actively being researched by drug companies to improve the efficacy of wrinkle improvement. Xeomin is one of these newer alternatives that works similarly to improve one’s appearance.

Xeomin was FDA approved in 2011 for the temporary improvement in the appearance of moderate to severe glabellar lines, or frown lines between the eyebrows, in adult patients. There are other similar anti-wrinkle drugs currently available (ex. Dysport®) and treatments in the pipeline, so we may have even more Botox alternatives available within a few years.

How does Botox and Xeomin work

Botox (onabotulinumtoxinA) and Xeomin (incobotulinumtoxinA) are slight variations of botulinum toxin type A, a protein molecule that temporarily effects muscle activity. These treatments address fine lines and wrinkles by relaxing the muscle tissue. This relaxation of facial muscles reduces the appearance of wrinkles in the treated area. Modification of muscle activity can also help contour the face, lift the brow, and smooth the neck too.

Both are generally considered safe with similar side effects for all skin types. They both start working within a few days and last several months. 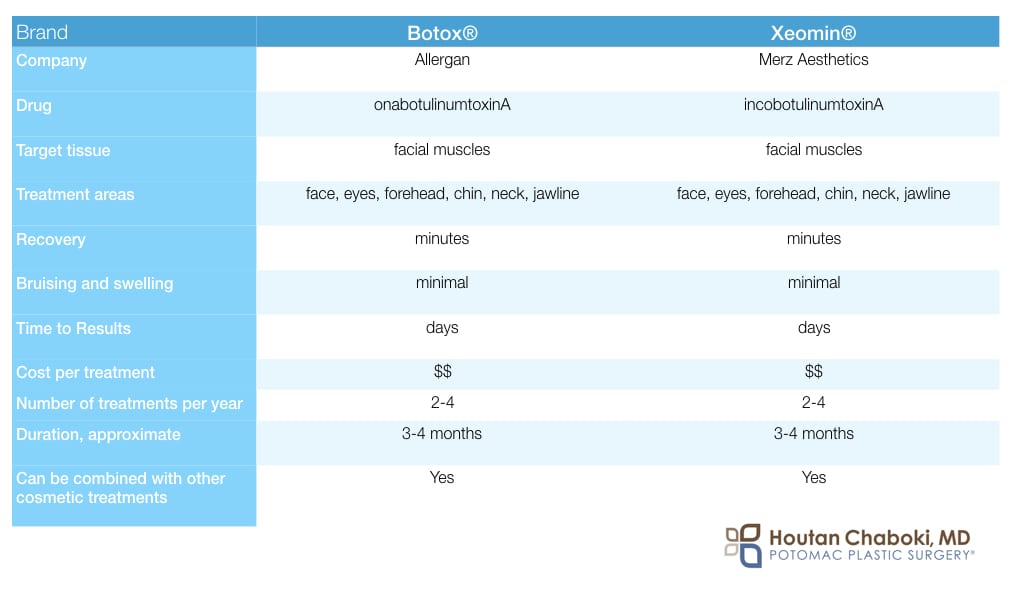 Comparison between Botox and Xeomin in plastic surgery and dermatology.

Botox and Xeomin have been used in the following areas similarly by plastic surgeons and dermatologists:

Differences between Botox and Xeomin

Many aesthetic physicians feel that there are more similarities than differences between Botox and Xeomin, and those differences might not always be clinically significant. In a double blinded research trial, both the treating physician and patient didn’t know what was injected between these two drugs and the results appeared the same.

Some differences, however, exist between Botox and Xeomin. Xeomin might take just a little longer to work, so results may start a bit later as compared to Botox. However, patients may not necessarily notice an appreciable difference in onset of action.

The main difference between Xeomin and Botox is that Xeomin contains just one ingredient, botulinum toxin A, without any additives. Xeomin is subsequently considered a more pure form of botulinum toxin A. A potential benefit of this feature is that one is less likely to become resistant to Xeomin, as some patients may develop antibodies to Botox (and Dysport). In practical terms, those who develop resistance to treatments are relatively immune from the cosmetic effects and don’t get the same wrinkle reduction.

Combine Botox or Xeomin with other cosmetic treatments

Both Botox and Xeomin are commonly combined with other office treatments to improve one’s appearance. For example, patients often have brows lifted with Botox/Xeomin and cheeks augmented with facial fillers at the same time. Speak with your facial plastic surgeon on what combination treatments are appropriate.

Overall, Botox and Xeomin are similar drugs to soften wrinkles and contour the face. There isn’t a “best” option. Some patients and doctors may prefer one over the other. In double-blind clinical research studies, both the patient and the doctor were unable to tell the results apart. Keep in mind that the person injecting may be just as important as the treatment itself.

Have you considered starting Botox injections? Considering an alternative to Botox? Share your thoughts below.