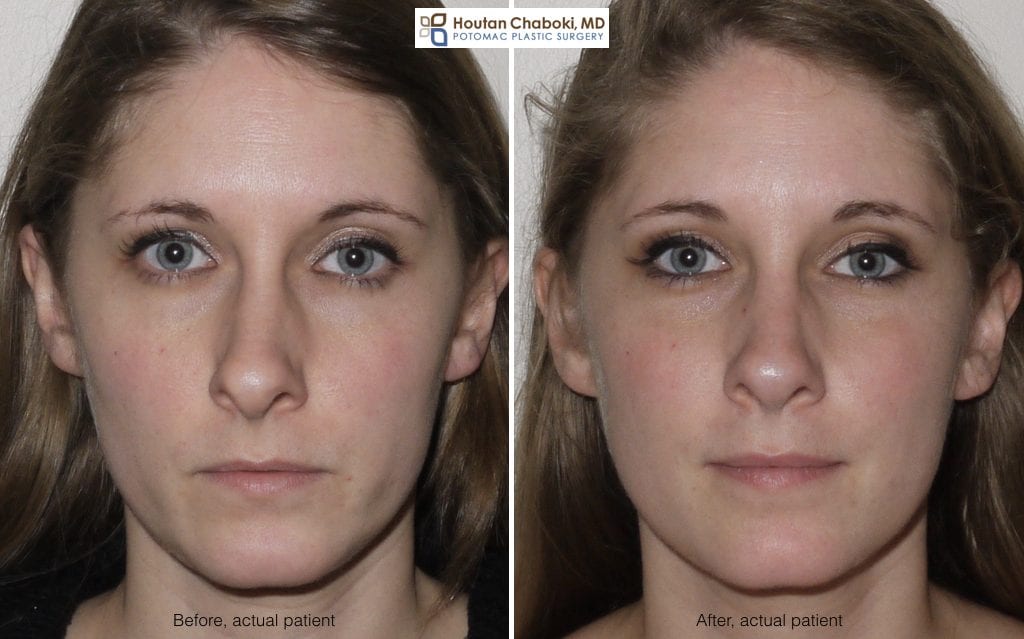 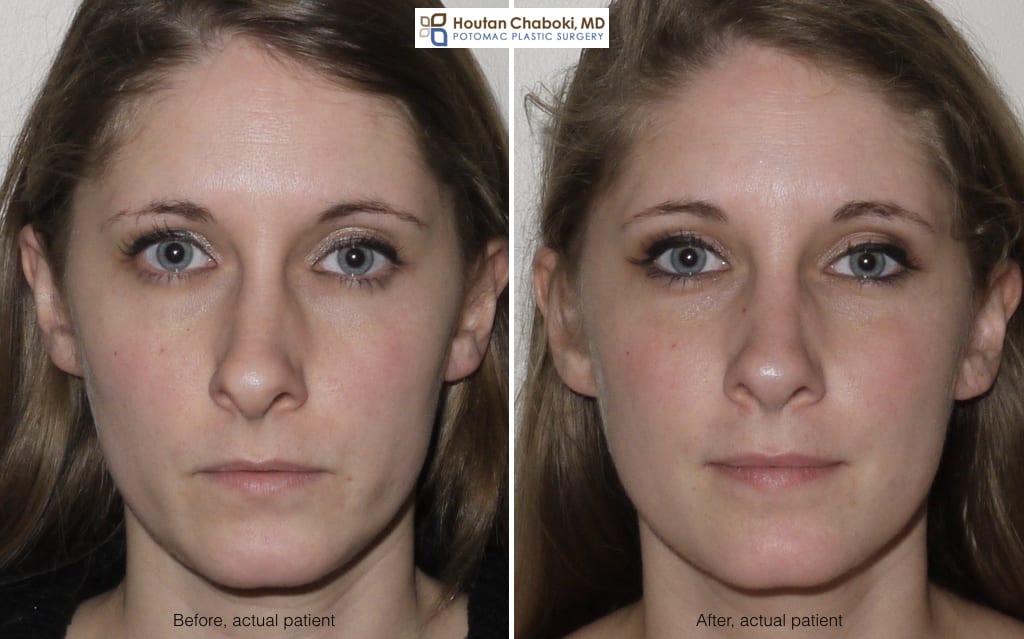 Before and after broken nose repair. Patient had closed rhinoplasty, septoplasty, and turbinate reduction to help improve her nasal congestion and appearance of the nose. The tip of the nose was also conservatively setback to reduce a droopy tip. Her rhinoplasty was performed soon after injury.

Deviated noses are commonly seen in a facial plastic surgery practice. A deviated nose may develop naturally as the nose develops from childhood or following nasal injury and trauma. The nose, since it projects from the face, tends to get a more of the facial injuries.

What is a broken nose?

A broken nose typically refer to fractures of the nasal bones. However, the cartilage and tissue of the nose and nasal septum may be injured as well. Some signs and symptoms of a broken nose may include: 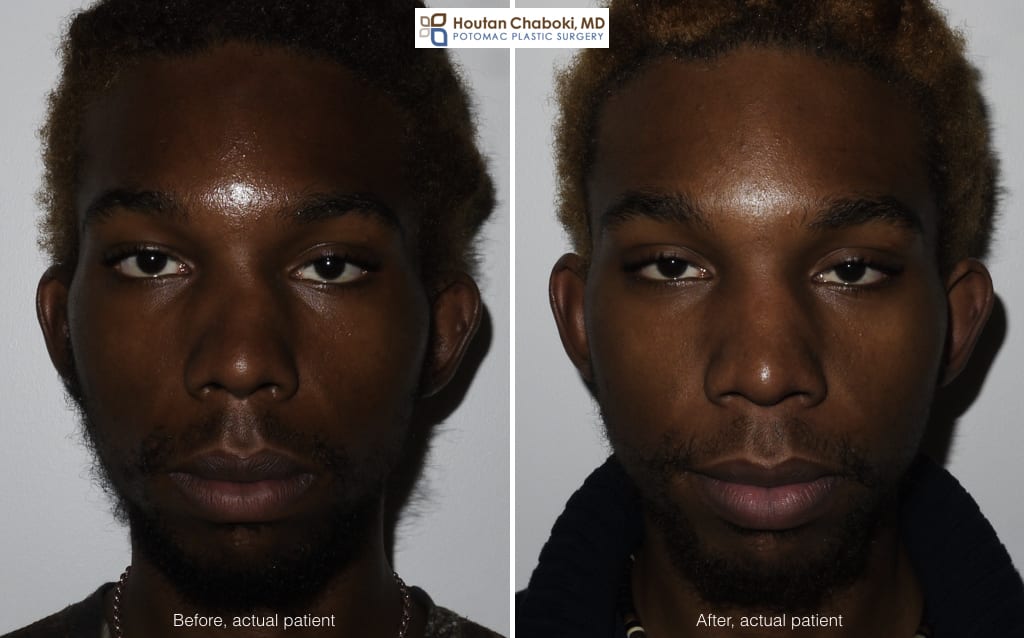 Before and after broken nose repair. He underwent a closed rhinoplasty and septoplasty. His rhinoplasty was performed long after the original injury.

Nasal injuries are often evaluated by a plastic surgeon, otolaryngologist, or facial plastic surgeon soon after the injury. The surgeon can help determine if the nose was fractured or just swollen. Sometimes swelling alone may make the nose appear asymmetric. Nasal swelling may last several weeks and occurs both on the outside and inside of the nose.

How is a broken nose treated?

Minor nasal injuries and fractures may not necessarily require surgical intervention, such as septoplasty or rhinoplasty. If your nose appears as it did before the injury and nasal breathing is not blocked, then treatment may involve just rest and observation.

Broken noses can be repaired with a closed reduction, if there is new deviation or the bones have shifted from injury. This relatively minor procedure repositions the nasal bones and septum back to its original position.

Closed reduction for a broken nose can be performed in the office with local anesthesia. For more severe injuries or patient preference, plastic surgeons will treat broken nasal bones in the operating room with general anesthesia or IV sedation (twilight anesthesia). The procedure is very quick and simple and patients may return home afterward. A cast or tape is placed over the nose for a week afterward.

Is rhinoplasty performed at the same time of broken nose repair?

Most plastic surgeons fix the broken nose first, then perform a rhinoplasty at a later point if desired. Generally, nasal healing and recovery is better, and rhinoplasty results are considered more predictable when rhinoplasty is done separately from the acute injury. Many plastic surgeons and rhinoplasty specialists wait at minimum 6 months after a broken nose before contemplating another surgery. For patients who had an old injury or multiple nasal injuries over the years, then rhinoplasty or septoplasty may more likely be required, since nasal bone reshaping (i.e. osteotomy) is often necessary. 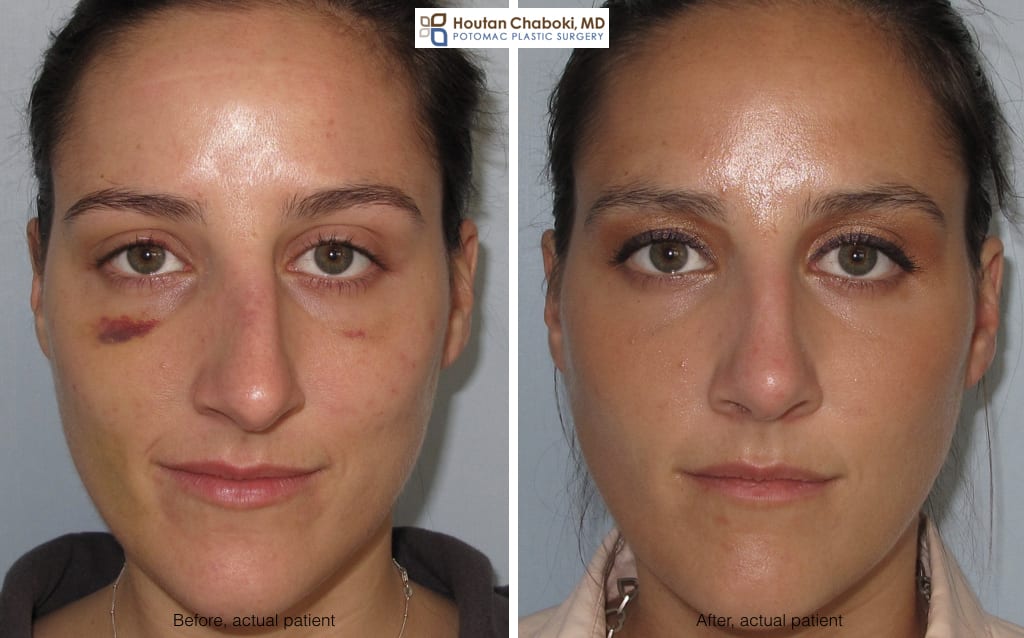 Before and after broken nose repair. She underwent an open reduction of the nasal fracture with conservative rhinoplasty and deviated septum surgery. Her repair was performed soon after injury.