Reducing a Bump with Preservation Rhinoplasty 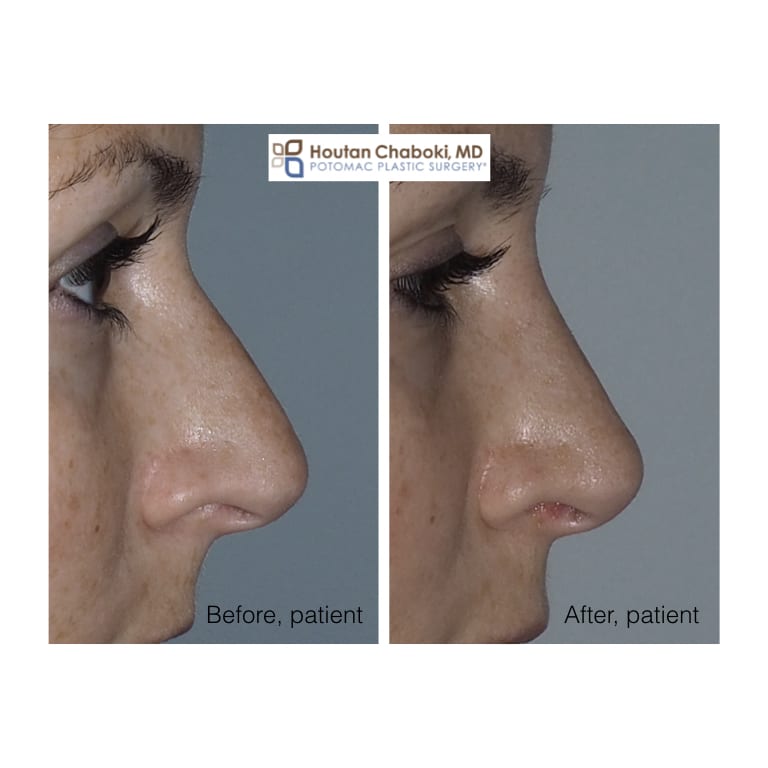 Before and after preservation rhinoplasty via a closed approach to improve the profile and reduce a bump by Dr. Chaboki, a Washington DC rhinoplasty specialist. The tip was also rotated slightly upward. After photograph is several weeks after rhinoplasty.

Nose reshaping or rhinoplasty was the third most popular procedure in 2018, according to plastic surgery data. Breast augmentation and liposuction was more popular. Nose surgery is the most common cosmetic facial surgery, while botulinum  (Botox®, Dysport®, and Xeomin®) remains the most common nonsurgical procedure.

Preservation Rhinoplasty to Reduce a Bump

Rhinoplasty surgery to reduce a bump is typically reductive, with plastic surgeons shaving, rasping, or filing down the bump. Another rhinoplasty method is to push down or let down the bump by removing tissue under the bump itself. This alternative method is called preservation rhinoplasty.

A characteristic feature of the preservation rhinoplasty procedure is to preserve the bone and cartilage of the bridge of the nose when reducing a bump. As an analogy, instead of reducing the size of a tower by removing the top, the size of the tower is reduce by reducing the feet and settling in down. One potential benefit of preservation rhinoplasty is a smoother and more natural bridge during hump reduction. Rhinoplasty is considered the most difficult cosmetic surgery by plastic surgeons. Closed rhinoplasty, also known as endonasal, modifies nasal bone and cartilage without any external incisions.

Closed rhinoplasty is more difficult to learn by plastic surgeons, and closed preservation rhinoplasty has an even higher learning curve for some surgeons. Dr. Chaboki is one of a few select rhinoplasty specialists in the US who perform this type of nasal surgery. 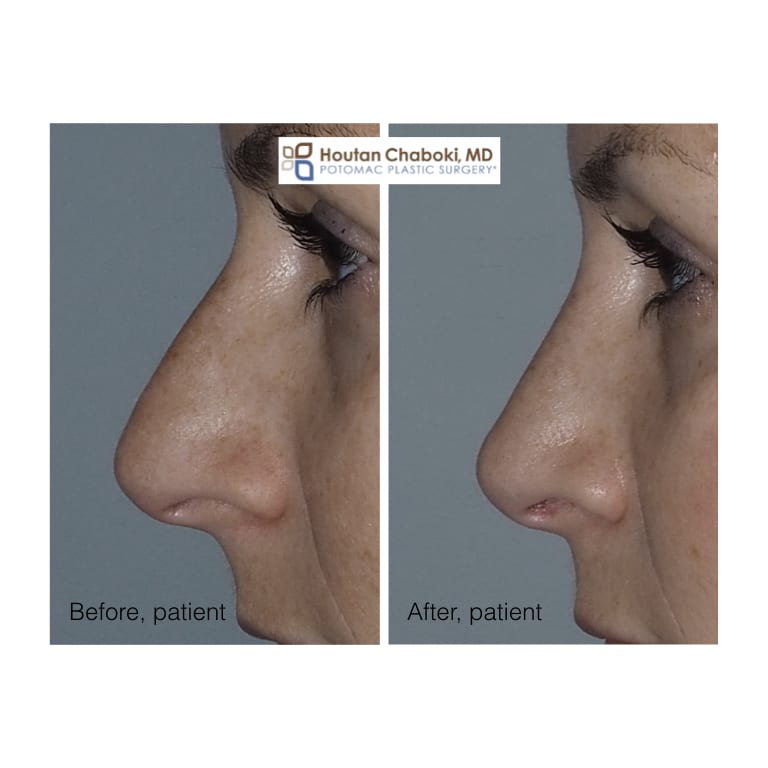 Before and after preservation rhinoplasty via a closed approach to improve the profile and reduce a bump by Dr. Chaboki, a Washington DC rhinoplasty specialist. The tip was also rotated slightly upward. After photograph is several weeks after rhinoplasty.

Dr. Chaboki performs preservation rhinoplasty via a closed, endonasal approach to reduce a bump for this patient. External incisions or scars are not used with the closed approach. Dr. Chaboki is pushing down the bump to improve the profile for natural results.

Considering nose reshaping to reduce a bump? Contact the office to see if you’re a candidate for preservation rhinoplasty.

2 Responses to Reducing a Bump with Preservation Rhinoplasty

With the lifting of stay-at-home orders, we will begin seeing patients at our practice on June 1. We've enhanced the culture of safety that we've always followed by adopting proactive infection-control measures designed to ensure the safety of our patients and staff. These include frequently disinfecting offices and surfaces, limiting appointments to the patient only, and requiring everyone to wear masks that cover the nose and the mouth.

We appreciate your cooperation and look forward to seeing you!