Patients generally understand 2 main types of rhinoplasty: open and closed. Open rhinoplasty makes an incision between the nostril in order to access the cartilage and bone of the nose. Closed rhinoplasty, also known as endonasal, modifies nasal bone and cartilage without any external incisions.

Rhinoplasty surgery can also be categorized as reductive and preservation. This classification refers to the method of changes to the bone and cartilage, rather than the approach itself to the nasal tissue.

One of the main components of the preservation rhinoplasty procedure is to preserve the bone and cartilage of the bridge of the nose when reducing a bump. Conceptually, instead of reducing the size of a tower by removing the top, the size of the tower is reduce by reducing the feet and settling in down. The result is a smoother, natural bridge during hump reduction. 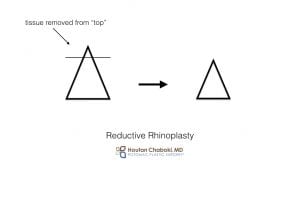 Bridge preservation allows the plastic surgeon to keep the normal anatomy intact as much as possible. Swelling and bruising can be improved with preservation of the bridge. Some surgeons maintain the skin on the cartilage to allow even easier recovery.

In the video, Dr. Chaboki performs preservation rhinoplasty via a closed, endonasal approach to reduce a bump. External incisions or scars are not used with the closed approach. Dr. Chaboki typically performs bump reduction (as seen in the video) before tip surgery during rhinoplasty. He is pushing down the bump to improve the profile for natural results. Tip modification is performed later during the rhinoplasty operation.

Contact the office to see if you’re a candidate for preservation rhinoplasty.