Before and after a series of Kybella to improve a double chin. Superficial fat goes away slowly over time. This patient only received 2 Kybella treatments several months apart. After photograph is approximately two months from her second treatment. Additional Kybella treatments can further reduce neck fat as desired. Results will vary.

A defined chin, neck, and jawline is desired by many Washington DC plastic surgery patients, while a double chin (i.e. submental fullness) is avoided in this fitness focused population. Exercise and a healthy diet has trouble with this problem area, as neck fat is resistant to lifestyle modification. With the rise of nonsurgical liquid lift treatments such as Botox® and facial fillers for the cheeks and eyes, patients often ask their cosmetic surgeon if nonsurgical procedures can also improve the chin too.

Chin and neck liposuction is considered the gold standard for neck and chin fat reduction. Liposuction is a minor surgical procedure that works via 2 general mechanisms: (1) immediate fat reduction of the superficial layer of neck fat, and (2) skin tightening which may occur gradually over several months after liposuction. It’s a minor procedure that may be performed via local anesthesia in appropriate candidates.

This skin tightening effect after liposuction is variable, but generally younger patients tend to tighten more as compared to older patients. Older patients who have significant skin laxity will more likely need a lower facelift or neck lift surgery to adequately address loose tissue. Liposuction may be performed with other plastic surgery, such as a facelift, neck lift, or chin augmentation to maximize definition of the neck and jawline.

Continued worldwide interest in the aesthetic market has brought an alternative to liposuction in plastic surgery offices. The makers of Botox have introduced Kybella® in the US, a series of office injections that gradually reduces fat under the chin. Outside the US it is known as Belkyra®. It’s a synthetic form of deoxycholic acid, which occurs naturally in our bodies to digest fat.

Liposuction vs. Kybella for a Double Chin 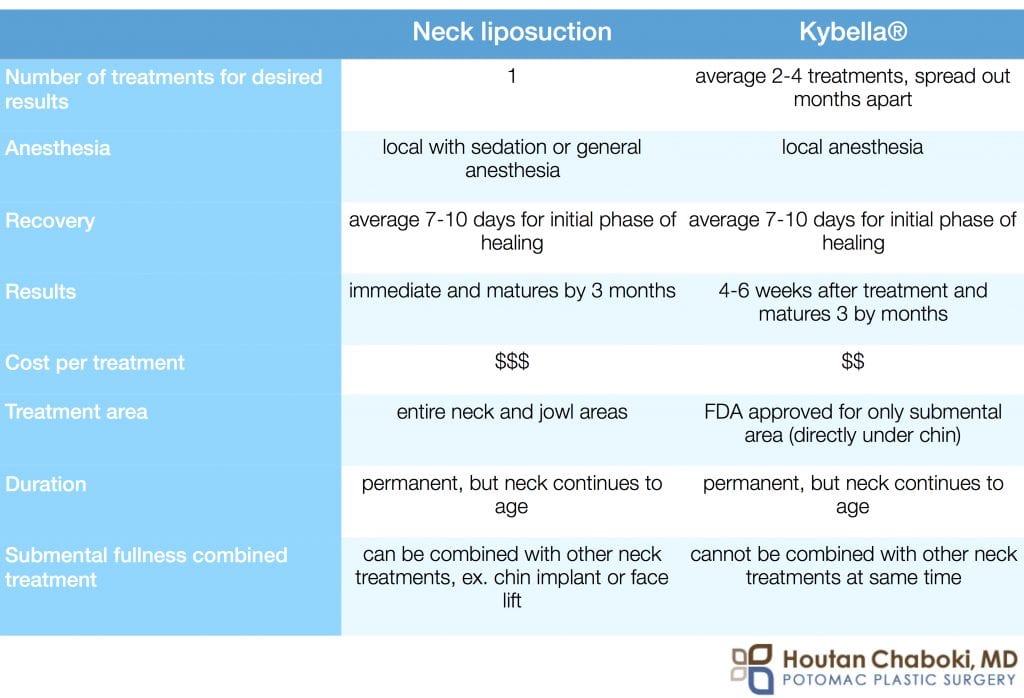 Neck liposuction may initially appear more expensive, but it has only one recovery period, can treat broader areas, and may be actually less expensive in the long-term. Patients may see improvement immediately with liposuction and continued skin tightening over time. In addition, neck liposuction can be combined with a chin implant and/or face lift for patients with a weak chin bone and/or sagging skin.

Kybella® cannot be combined at the same time with other neck treatments, and patients must be cautious if they have had any prior neck surgery. Kybella also requires at minimum two treatments (if not more) months apart with a recovery period after each treatment. Patients with more neck fat will require more Kybella injections.

So, which treatment is better for neck fat?

As with many aspects of plastic surgery, there isn’t a “best” option. The decision regarding what is best for a patient is determined by multiple factors, including an individual’s neck anatomy and personal preference.

Nonsurgical neck fat reduction with Kybella doesn’t replace neck liposuction for patients with a double chin. However, Kybella may be appropriate for those patients with a small amount of isolated neck fat who don’t want surgery. Kybella has also be used by plastic surgeons and dermatologists in other isolated areas, such as bra fat.

Consultation with a cosmetic surgeon who specializes in both surgical and nonsurgical procedures can help patients determine the specific cause(s) of their double chin and provide guidance regarding appropriate treatment options.

Considering treatment for a double chin? Contact the office to speak with a cosmetic surgery specialist.

One Response to Double Chin treatment without Liposuction